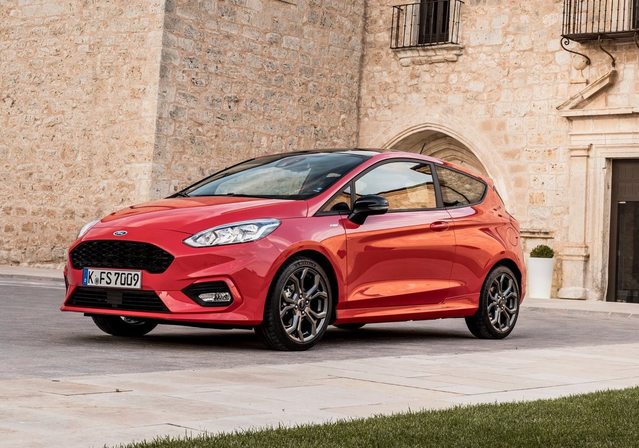 A 48-volt installation of a mild hybrid was introduced, together with sophisticated new driver assistance systems, such as adaptive cruise control with Stop & Go functions, a system for recognizing speed limit signs and keeping the vehicle on the lane, which aims to reduce voltage while driving on highways and in the city .1

“Enhancing Fiesta’s best-in-class driving performance with the EcoBoost Hybrid system means customers will have even more power and visit gas stations less often,” said Roelant de Waard, vice president of marketing, sales and service at Ford of Europe. – Fiesta EcoBoost Hybrid will allow more Ford drivers to experience the benefits of having electric drive than ever before.

Ford has committed to offering an electrified version of every passenger vehicle it introduces in Europe, so by the end of next year it will increase the European range of electrified vehicles to 18 models.

Traditional Fiesta powertrains have been refined thanks to the new generation 1.0-liter EcoBoost gasoline engine and by coupling with a seven-speed dual clutch automatic transmission for lower fuel consumption and CO2 emissions.

In addition, Fiesta is now better connected thanks to the FordPass Connect modem fitted as standard, which provides a number of functions via the FordPass mobile app, which will make using the car easier and bring greater satisfaction to the owner.3

The varied range of Ford Fiesta models includes the stylish versions of the Fiesta Trend and Fiesta Titanium, the SUV-inspired Fiesta Active crossover, the sports Fiesta ST-Line and the exclusive Fiesta Vignale in three- and five-door body versions for different versions. In 2019, Ford sold 227,100 Fiesta models in Europe.

Fiesta drivers can now use the advanced EcoBoost Hybrid soft hybrid system, introduced for the first time in the passenger car of the brand at the end of 2019, in the new Ford Puma crossover.

Fiesta EcoBoost Hybrid models are offered in two variants of power 125 HP and 155 HP. The standard alternator has been replaced by a starter / generator (BISG), driven by a belt, which allows energy recovery during speed deceleration and coasting and using it to charge a set of air-cooled lithium-ion batteries with a rated voltage of 48 V.

BISG also works as an electric motor, smoothly cooperating with a three-cylinder combustion unit with low internal friction losses, using stored energy to strengthen the torque during normal driving and acceleration, as well as to power the vehicle’s electrical equipment.

The intelligent, self-regulating soft hybrid system constantly monitors the way the vehicle is used to determine when and how to charge the battery intensively. This allows you to get tangible benefits and use the energy stored in the battery in accordance with one of two action plans:

BISG also enabled Ford engineers to reduce the compression ratio of the 1.0-EcoBoost engine and use a larger turbocharger, which they decided to limit the effects of a slower response to the accelerator pedal. This was possible due to the use of additional torque, which also increased the engine and turbocharger speed.

The more powerful BISG also allows the use of the Auto Start-Stop system in the Fiesta EcoBoost Hybrid model to expand the range of driving scenarios in which it operates. It also provides even more fuel savings, even when coasting to a stop at speeds below 25 km / h, even when the vehicle is in gear with the clutch pedal depressed.

Both the Fiesta EcoBoost Hybrid and the versions with traditional gasoline engines – with 95 HP and 125 HP – the latest generation of the award-winning 1.0-liter EcoBoost engine with cylinder deactivation system works under the hood.

The system increases economy by automatically stopping the fuel supply and the operation of the valves of one of the engine cylinders in conditions where full displacement is not needed, for example when coasting or driving with low power demand. One of the cylinders can be deactivated or restarted in 14 milliseconds, i.e. 20 times faster than the blink of an eye, without any compromise in terms of performance or engine culture.

Systems introduced to Fiesta ensure traveling in a more refined, relaxing environment with the possibility of maintaining constant contact with the world, as well as trouble-free movement in the city with frequent stopping of the car and driving on the highway.

Available Adaptive Cruise Control (ACC) enriched with Stop & Go system and speed recognition signs recognition system allows you to maintain a safe distance from vehicles in front. The system also helps to reduce stress during long journeys by adapting the vehicle speed to the restrictions in force at a given place, monitoring road signs placed on the road and above the road.

Stop & Go – available on models with a seven-speed, dual-clutch automatic transmission – allows the ACC system to bring the vehicle to a complete stop in motion that requires stopping and starting and automatically move behind the preceding car if the stop time was less than 3 seconds. If the stopping time exceeds 3 seconds, the driver can press the steering wheel button or gently press the accelerator pedal to start driving.

FordPass Connect on-board modem available as standard, which allows customers to remotely control selected vehicle functions from anywhere using a mobile device and the FordPass app. In addition to helping you plan faster, less stressful journeys thanks to real-time navigation updates for the navigation system, the system offers remote locking and unlocking of door locks as well as remote engine start4 in versions equipped with a seven-speed automatic transmission, as well as the location of the vehicle, vehicle status, which informs about the fuel level in the tank, the condition of the alarm system, the need to change the oil, etc.

The SYNC 35 communication and entertainment system has also been improved, increasing the intuitiveness and ease of use, thanks to the new user interface with larger buttons displayed on the 8-inch color touch screen. The system is compatible with Apple CarPlay and Android Auto ™ and does not require additional fees. A new induction charger is also offered, which helps passengers charge smartphones while traveling.

More news for the Fiesta version:

– Fiesta now gives more pleasure than ever before. With FordPass Connect, you can close and open it, find it in the parking lot, check your last trip and make sure you have enough fuel to drive on – all of it is in your hand, so you’re always ready to go, “said Roelant de Waard.

The body number is used worldwide by...

Do you want to find the right tyres for...

The VIN is a unique code that...