Toyota – how to find, decode and check the VIN?

Toyota – how to find, decode and check the VIN?

The body number is used worldwide by vehicle manufacturers to uniquely identify the car. The VIN also contains technical data on the manufacturer, model year and original equipment. By checking the Toyota VIN, you can find detailed information on any important events affecting the car, such as the number of previous owners, previous mileage or involvement in accidents. However, to decode the VIN, we must first locate it. So where to find the VIN in the Toyota and how to decode it? We will tell you in the article.

The body number encoding in a Toyota car allows, among other things, verification of whether the current equipment is original. We can check such Toyota parameters as place of production, paint colour and number of airbags. However, what interests those planning to buy Toyota from the aftermarket the most is whether it has been involved in any accidents in the past, what mileage it has undergone and whether it has actually undergone service repairs. By decoding the VIN via the form below, you will also find out whether the Toyota you want to buy is not listed in the several available stolen vehicle databases.

Toyota – where to find the VIN number?

Experience has shown that finding the chassis numbers can be difficult. The more that, depending on the model and year of Toyota, the numbers can be stamped in very different places. If you are wondering where the VIN on the Toyota Auris is, the manufacturer in the models produced in the years 2007-2010 placed the VIN number on the permanent element on the floor under the passenger seat, and the nameplate with the VIN on the middle left pillar. The same is the case with the younger year 2010-2012 Auris and the popular Toyota Avensis. Equally common on our roads, Corolla has the VIN number on the permanent element placed on the bulkhead. The Toyota RAV4 SUV, on the other hand, is located on the left center pillar. On the other hand, Toyota Yaris from the year 2005-2008 has the VIN number on the permanent element located on the floor in front of the passenger seat.

Regardless of whether you are looking for a VIN in Toyota Verso, Aygo or Corolla Verso, it is worth using the dedicated tools available online. 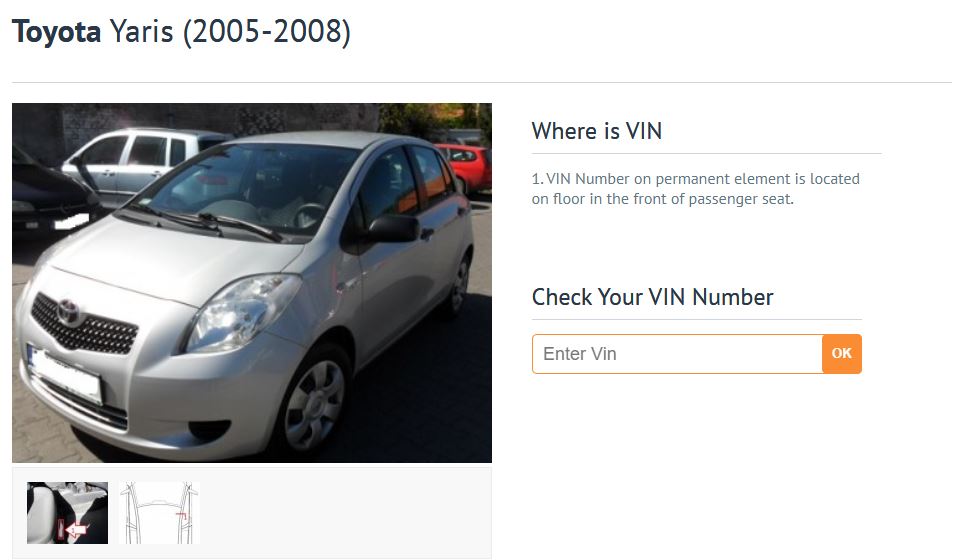 VIN check on a Toyota car

Checking the VIN on a Toyota vehicle, regardless of whether you are interested in Yaris or Auris, gives you the opportunity to verify the factory equipment, the participation of the car in accidents and the number of previous owners. Importantly, in the case of cars imported from abroad, thanks to the vindecoder, we can see the history of car servicing and its mileage. For many people it is also important that checking the car by VIN number allows you to search the databases of stolen vehicles. The chassis number can be checked online, regardless of the time of day. Just fill out the form below and use the free or paid version of the report on a given Toyota vehicle. The cost of a full vehicle history report is really low in relation to the price we can pay for a car that may have hidden problems or is overpriced.